Vehari (Urdu: وہاڑی) is a city in the Punjab province of Pakistan. The city, which is the capital of the district and tehsil of the same name[4], is located at 30°1’0N 72°21’0E at an altitude of 135m (446ft)[5] and lies about 100 kilometres from the regional metropolis of Multan and about 25 kilometres north of the river Sutlej – the southernmost of the five rivers of the Punjab region. A headworks of canals is located on this river near Luddan on the Luddan-Vehari canal providing irrigation water to both banks of the river, which includes the upper fringes of theCholistan Desert. Read More>>
This map has been been prepared by Irsa Afzal and Iqra Yousaf. They are Urban Planners from Department of City & Regional Planning, University of Engineering & Technology, Lahore.

Street level mapping has been completed using high resolution images (0.6-1m) of  Google Earth dating May 20, 2009 within a period of two months. Detailed process is mentioned in the tutorial HERE. 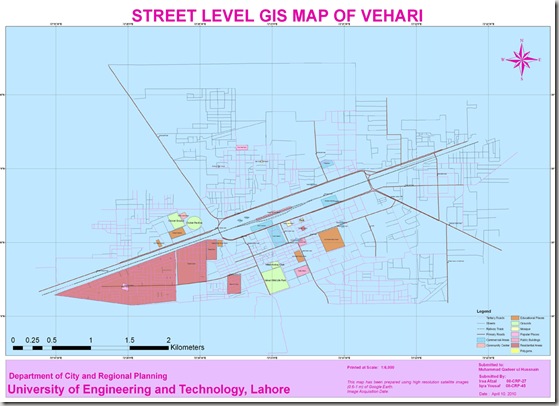