This is a true addition to the existing effort on GIS mapping of Okara which was done by Munawar and Nausheen (CRP-08) in 2009. Previous map can be seen HERE. Relying on NASA Earth Observatory on Natural Hazards, following image has been geo-referencing and converted to KML:

The Moderate Resolution Imaging Spectroradiometer (MODIS) on NASA’s Aqua satellite captured this image of Pakistan. This image uses a combination of infrared and visible light to increase the contrast between water and land. Water appears in varying shades of blue, vegetation is green, and bare ground is pinkish brown. Clouds are bright turquoise. 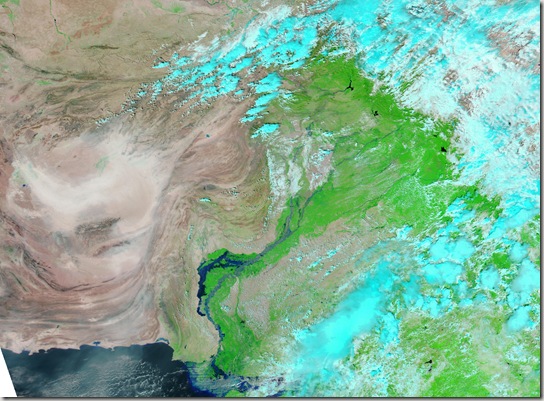 Okara Urdu: ( اوکاڑہ) is the capital city of Okara District in the Punjab province of Pakistan.[1] The city is located south-west to the city of Lahore and is famous for its agriculture-based economy and cotton mills. The nearest major city from Okara is Sahiwal (formerly known as Montgomery).
Okara has the largest storage capacity in Asia and is a fairly large district in Pakistan in terms of population. There are famous Pakistan military dairy farms, especially famous for their cheese situated in Okara. These farms are of the Pre-partition or British Indian Era. Mitchels farms also are located in the nearest town Renala Khurd in the Okara District. Read More>>
This street level GIS map has been been prepared by Nausheen and Munawar. They are Urban Planners from Department of City & Regional Planning, University of Engineering & Technology, Lahore. 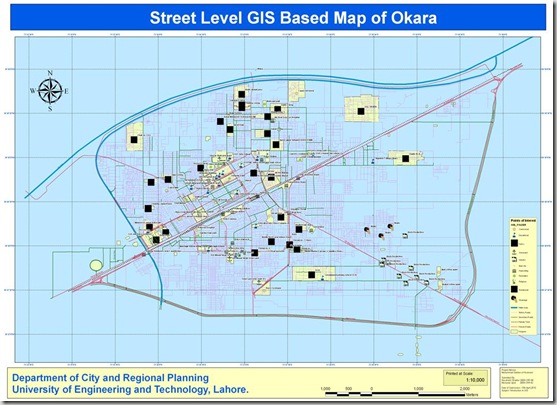